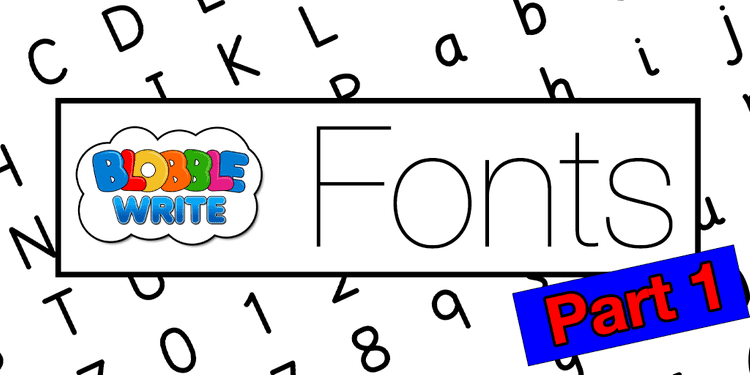 Here at BlobbleWrite HQ we are working on two new apps. The first, BlobbleWrite Cursive, is a cursive version of the original BlobbleWrite app. The second is BlobbleWrite Printables, an app for teachers and parents to create and print out handwriting worksheets using the letters and line forms from the BlobbleWrite family of apps.

As part of the development for these new apps we obviously need to create a new cursive font for the BlobbleWrite Cursive app. In doing so we decided to review our existing font to see if we could improve anything. This blog post is the first in a short series to explain the process we used and hopefully to encourage teachers and parents to send us their feedback.

The BlobbleWrite apps use custom fonts that were created specifically for handwriting practice. The BlobbleWrite family of fonts are different to standard typographical fonts that you might find on a computer because they are entirely stroke based.

In a standard font each letter is effectively a stencil that is filled with color. This means that it is possible to create any shape or style - there are no restrictions on how the letter can look (it doesn't even have to look like the letter it is supposed to represent).

For a handwriting font this flexibility can be a problem. If a learner is using a pen or finger tracing app to copy a letter form there may be parts of a standard font which are impossible to replicate. A common issue is squared off edges and varying stroke width - these features can make a font more aesthetically pleasing but the letter will be impossible to replicate accurately using a constant radius stroke.

The example below shows how the letter 'a' is represented in three commonly used typographical fonts and in the current version of the BlobbleWrite Basics font. The red circles show where stroke width varies or where stroke ends are squared off or oddly shaped.

At BlobbleWrite we believe it is important for learners to be able to replicate exactly the letter forms they are copying. The BlobbleWrite letters are all created using a virtual pen that is dragged around a pre-defined path. This results in a letter form that can be replicated exactly with a thick pen or in the BlobbleWrite app.